Are you seeing different engagement rates on iOS and Android? Can’t figure out if it’s normal to have a higher push notification CTR (click through rate) on Android than on iOS? Don’t worry, you’re not alone in this. Read on to  find the answers to all of your questions.

After an extensive study of notifications sent in 2016 to users across the globe, covering all industries and verticals,  we found that engagement rates differ significantly between Android and iOS. 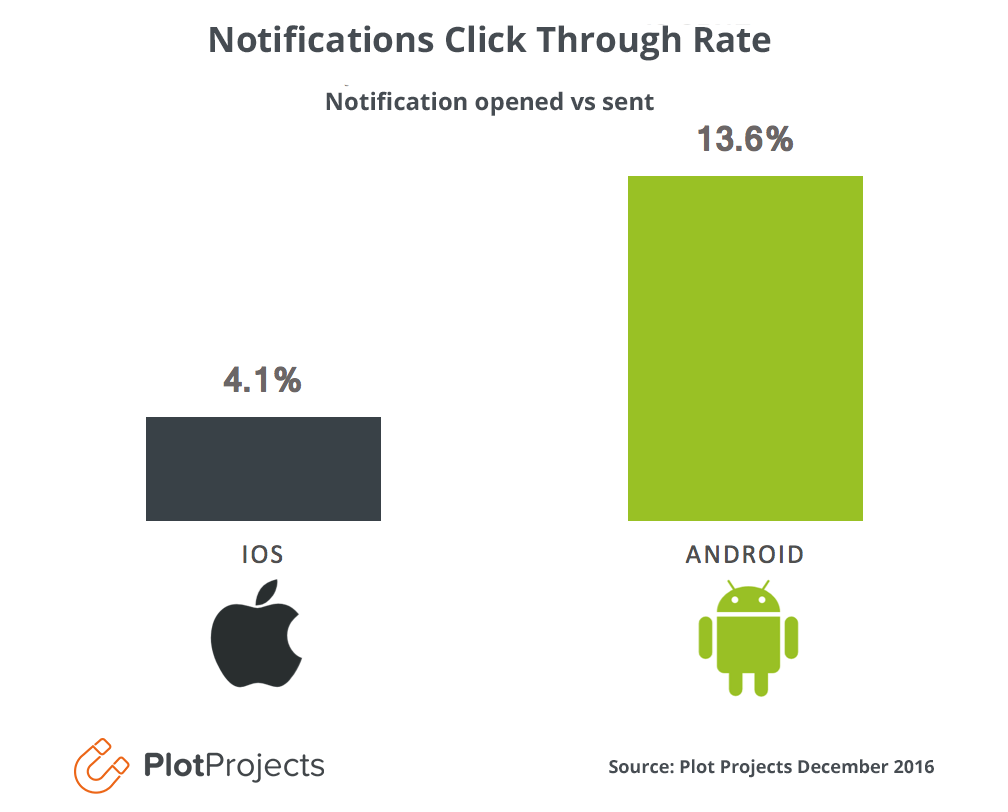 Why does this happen?

Notifications are much more prominent on Android. They repeatedly appear on the lock screen and sticky icons are placed on the home screen. iOS only reminds you of notifications once and then hides them in the notification center.

For simplicity we will refer to the pull down notification menu as “Notification Center” for both iOS and Android throughout.

5 key aspects that determine the differences in CTRs of Android vs iOS: 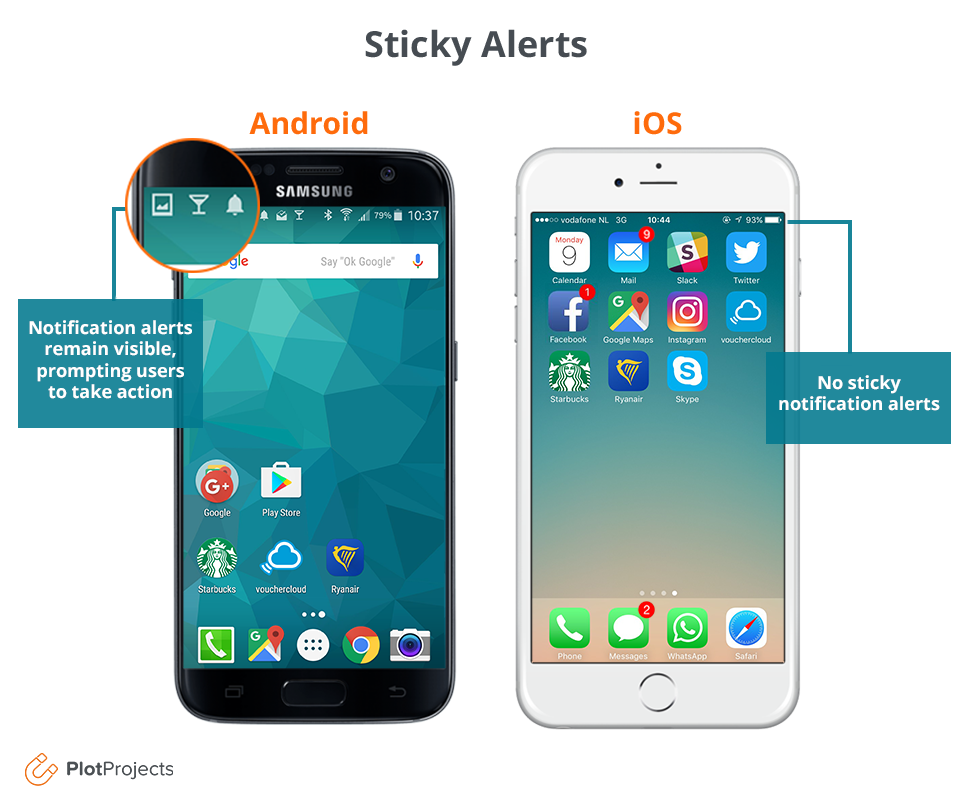 Notification icons always remain at the top left of an Android screen prompting users to take action to clear them. They work similarly to the red numbers (badges) that appear next to app icons.

On iOS there are no such sticky reminders. Notifications can only be accessed by pulling down the notification center. 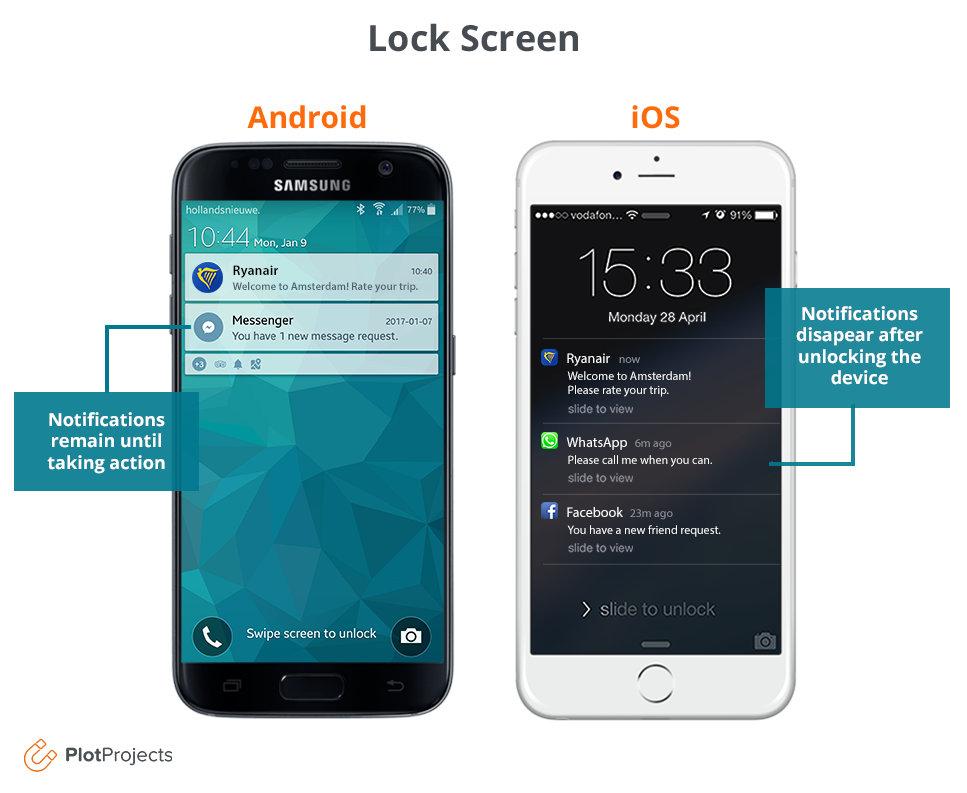 This hypothesis is further supported by introducing the fingerprint sensor as a variable. This feature was released on the iPhone 5S and Samsung got it working well with the Galaxy S6 and above.  The more convenient and quick way of unlocking your device means less time looking at the lock screen and your notifications.

We see a 1.3% higher engagement among users who don’t have a fingerprint sensor. 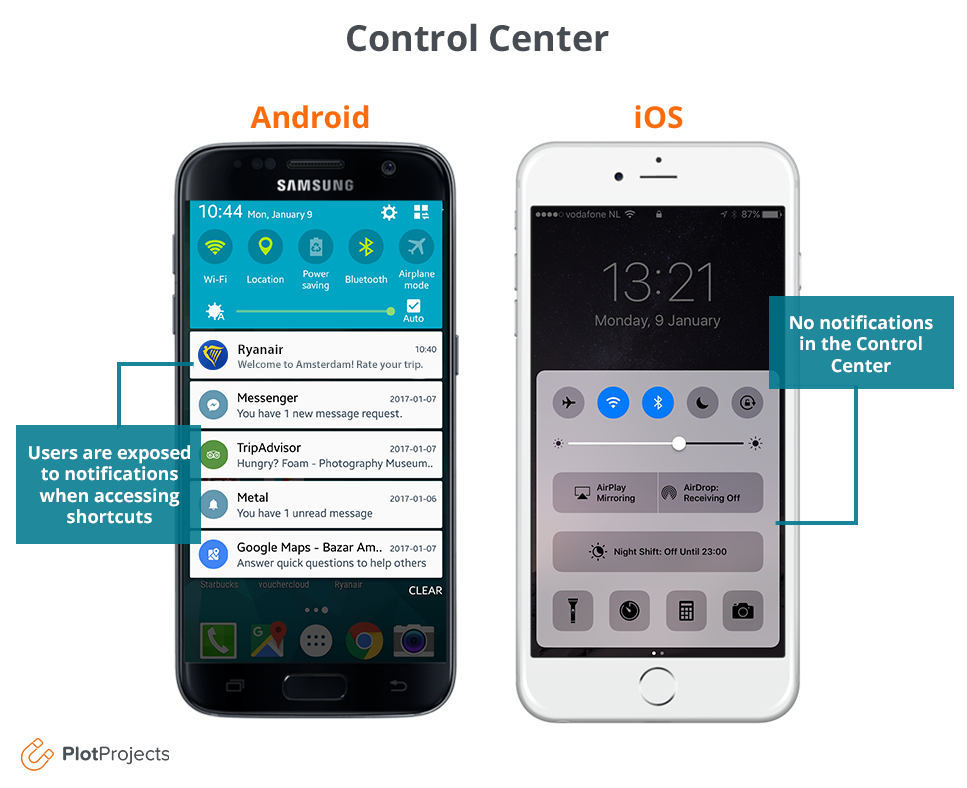 iOS users have an additional “pull-up” Control Center with access to wifi, music and other commonly used shortcuts, but no notifications.

4. Notification Center history and a peek ahead

The pull-down notification center that we know today was initially released on Android. In 2011, with iOS 5, Apple introduced a very similar looking feature (so much so, that Samsung sued Apple over it).

While Android is a clear winner when it comes to clicking on notifications, it may not be the whole story.

UrbanAirship and Appboy have developed their own metrics that account for the likelihood of a user opening an app after receiving  a notification message, whether she clicks on it or not. This is called an influenced open. Appboy reported that when this is taken into account, the engagement rate becomes comparable on iOS and Android.

Plot Projects’ customers consistently see a higher engagement rate across both platforms compared to non-geo push notifications. Location based targeting (enabled by geofencing and beacons) adds an extra level of relevancy to notifications making them more useful and interesting to app users. As a result, they see higher CTRs. 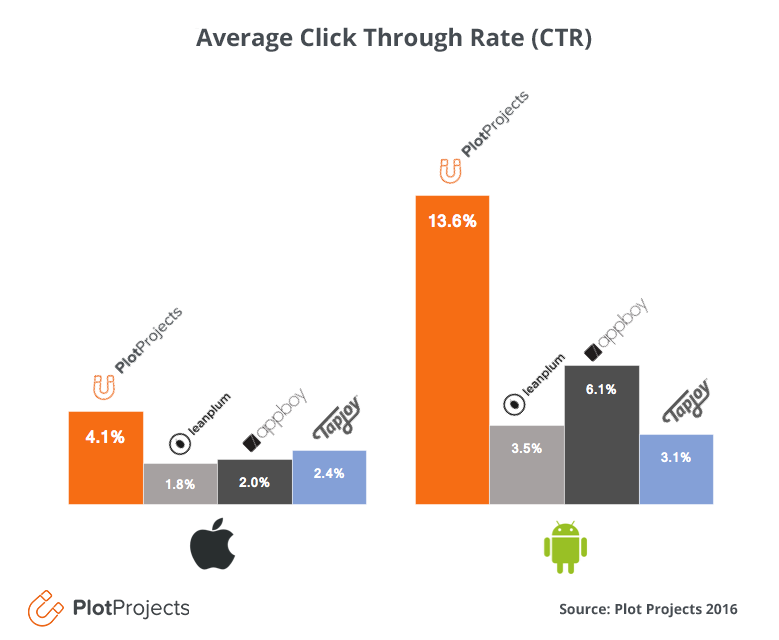 The graph above shows average reported open rate for notifications (users actively clicking on the notification). App opens that were not the result of a notification click are not taken into account here.

Leanplum, appboy and Tapjoy have a reputation for excelling in segmenting an app’s user base and sending relevant notifications to the right users. Generic push services that bulk send to all will have a lower CTR.

The old days of spray-and-pray marketing are well and truly over. Spammy apps that send generic messages get deleted. Engaging with your customers using relevant and interesting notifications is key. Some may even say it’s all about location, location, location!