Geofencing We hear the question a lot, should we build a web app, should we make a responsive website or should we do both? Some advantages of having a native app over a responsive website are that you have more features of the device at your disposal and the interface most of the times works better. Some advantages of a responsive site over a webapp are that you only have to develop your app once for multiple types of devices and your users don’t have to install your app from an app store before they can use your app. The advantages of native apps over browser apps are getting smaller in the future releases of Google Chrome and other web browsers, as these advantages are slowly coming to the browser as well.

During the keynote of the last Chrome Summit Google showed that although people spent most times in apps, they spent 75% of that time in their 4 most used apps. So when your app isn’t part of this top 4, you could ask whether it is really worth it to invest in an app. They showed that people when they went shopping usually use the web for that, not an app. 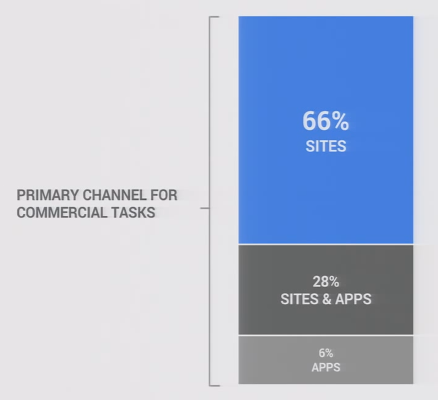 It is one of the reasons Google is making an effort to improve web browsers. For example their Material Design was available from the beginning on web browsers as just on Android. One way to further improve the user experience in the web browser is to give the browser access to device features. In a recent version of Chrome the support for sending push notifications has been added. This was one of the features that was limited to apps. Now more of these kinds of features find their way into the browser.

Something that is new for web applications is background execution at the device for web applications. This allows apps to, for example, refresh their content in the background or personalize the notifications for current user. For a user to “install” the app the user just has to pin the app to their home screen. In the just released version of Chrome for Android the browser will suggest placing the site on the home screen after a couple of visits so users don’t have to scour for that button in the menu.

This functionality is part of service workers. A service worker is a script that is run by the browser in the background, separate from a web page, opening the door to features which aren’t a response to user interaction. Service workers are already available in the current version of Chrome and Firefox.

One of those background features will be geofencing. W3C is now working on a specification on how to add geofencing support to the web browsers. Most contributions so far for this spec have come from Google, but anyone can give their feedback on the latest version of the specification on the GitHub page.

The API looks similar to the Geofencing API we know from native iOS and Android. You create a geofence object with a location and a radius. You can then register that geofence. When the user enters the area of the geofence a callback function is called.

When will it be available?

The specification is however still in an early stage, so it will take a while before the functionality will be available in a stable version of the web browser. It is still unknown in what version of Chrome the feature will be introduced, even though they have started with the implementation. Mozilla responded positively to continue the process, so it is likely we will find this feature in a future version of Firefox, but it is too soon to say when it will be available.

We at Plot Projects are of course looking forward to this feature, because we think it is a great and very useful addition the functionality of the web browser. Having the possibility to inform your users when it is most relevant will certainly increase the engagement with your app.

Don’t want to wait with sending geofencing notifications on the iPhone or Android device? Add geofencing to your Android and iOS app with our cloud service!