Other than improving our product in various ways, we also try to keep up with the latest trends in the frameworks realm. Thanks to this aforementioned effort, we’re happy to announce that Flutter integration is now officially supported. Talking about frameworks, we also assembled some examples of how to communicate with our SDK via React Native. Furthermore, not only did we release new versions of our SDK for both Android and iOS but also added a convenient feature to the dashboard.

A new version, 3.6.0-beta, of our Android SDK is now available. This version counts with a critical bug fix and a new feature. The bug fix provided in this version is a solution that solves an issue respecting the upgrade of devices using an earlier version. The announced feature is none other than the support for activity transition recognition which, as the name suggests, determines when a user movement changes. This mode increases the precision of our SDK when close to a targeted location and therefore bringing you better analytics and improving the overall user experience. To know how to enable and configure this feature, consult the Config File chapter of our documentation.

There were no new features introduced to the iOS SDK, however, one bug fix was applied to both stable and beta versions of the product. This issue impacted both apps with large geofences and customers with high geofence densities, if you’re part of either (or both) of these groups, we advise you to upgrade to one of our latest versions.

The interface used to interact with our product also gained a neat feature that should help when performing searches. This feature allows knowing which tags are available and provides quick access to them. From now on, when clicking in the location search input field in either the location list or map view, a list with tags shows up as proposed search values, as seen in the screenshot below. 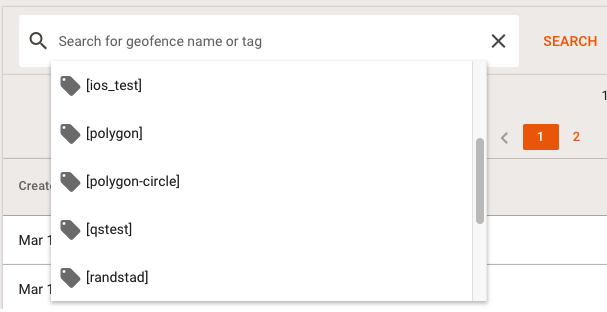 The basic integration of our plugin with React Native is as simple as with native Android and iOS, however, the use of advanced features or complex implementations might require access to the SDK via the React framework with javascript. Taking this into consideration, we compiled an example repository in GitHub that showcases how to create this bridge between native and React for both Android and iOS. The repository includes the implementation for Segmentation Properties and Contextual Pages but that should be enough to kickstart your implementation for the rest of the available features.