At Plot we already get a high accuracy for location based notifications based on Wifi and cell tower triangulation. Our smallest range with good results is currently 50 meters, without any special hardware needed. Pretty accurate, but targeting only the users who get into your store isn’t possible. Apple recently announced a technology named iBeacon to make this possible. It, for example, makes it possible to alert your visitors that a new product that your user recently viewed in your app can be bought here.

An iBeacon is a small device that just broadcasts its presence over Bluetooth 4.0. Apps can register for updates on when the user gets near to these devices. The phone doesn’t have to pair or set up a connection to make use of its services. The iOS API also makes it possible to make an estimate on how close you are to specific beacons based on the signal strength.

Although Apple created the iBeacon specification, it isn’t specific for Apple devices. All devices that support Bluetooth 4.0 can be used to detect iBeacons. Support for iOS devices starts with iPhone 4S and 3rd generation iPad. Several Android devices also support Bluetooth 4.0 and thus the use of iBeacons, such as the Samsung Galaxy S3.

Multiple vendors started to sell iBeacons, but is also possible to use an iPhone or an iPad as beacon. Since iBeacons don’t consume much power, they should last more than a year on a battery. Using an iPad may be convenient when you are already using iPads in your store or just want to test that your app works. Although most Android devices can detect iBeacons, they cannot be used as beacons themselves.

How to test with an iPhone/iPad

We have added beta support for iBeacon to our iOS plugin and our dashboard. Download the latest version of our plugin and you can test it yourself immediately. The download includes an example project where you only have to change the public token to get up and running. You can get your own public token at: http://www.plotprojects.com/getourplugin/. Our free account allows you to define five beacons, which will be more than enough to test with. 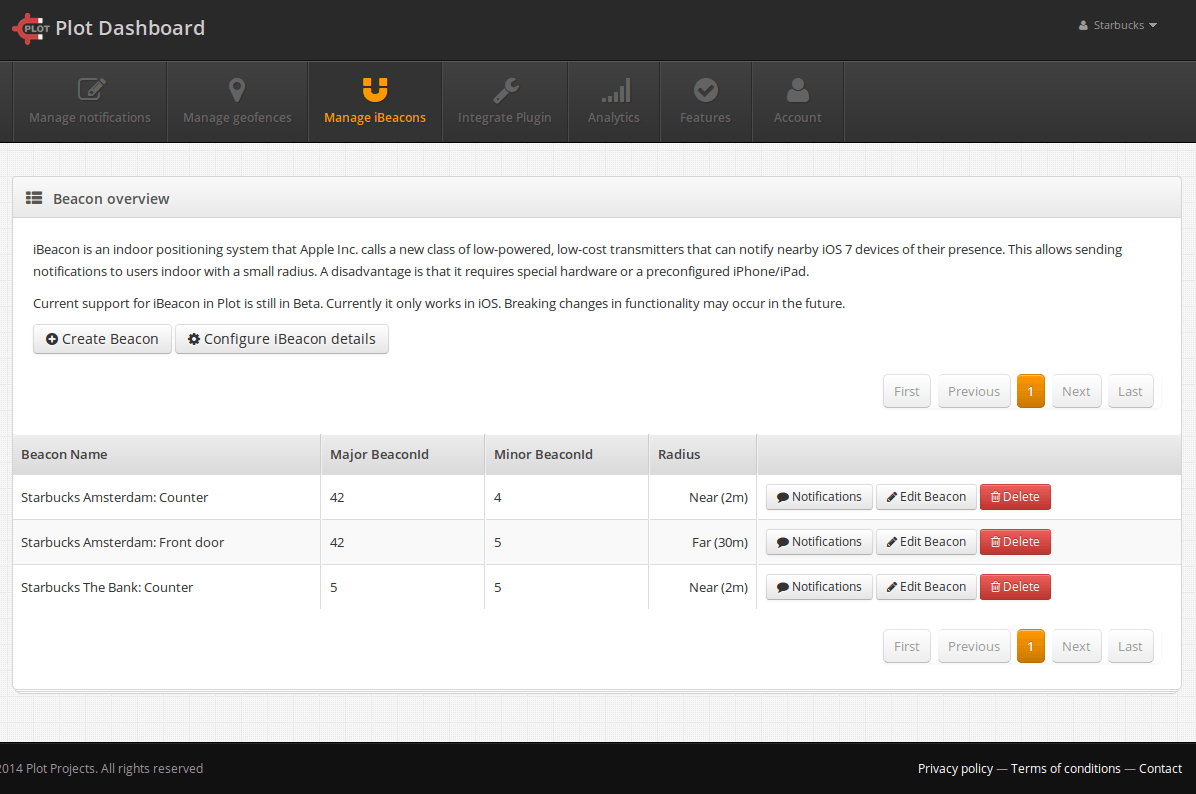 Managing your iBeacons from our dashboard is straightforward. You specify the proximityUUID for your account, so you don’t have to specify it again for every iBeacon in our dashboard. Instead of specifying the location as you would with a geofence, you specify a majorId and optionally a minorId. We allow to specify three distances: immediate (less than 1 meter/3 feet), near (around 2 meters/6 feet) or far (around 30 meter/100 feet).

You can turn your iPhone or iPad into a beacon too. We provide an example project on Github. To try it out you can download the code and directly put it on your device. The configuration for the iBeacon is in Beacon.m. The app will start with asking permission to broadcast and will start immediately as beacon. Due to limitations in iOS you have to keep the app in the foreground.

Since our library provides both, you may ask which you should use. Both Geofencing and iBeacon:

Of course it is possible to combine both geofencing and iBeacon in the same app.

I hope this was a nice introduction on using iBeacon with Plot. If you have further questions or have some other comment, please let us know.